Tiffany Trump is an American public figure and aspiring singer who has a net worth of $10 million. Tiffany is most famous for being the daughter of businessman, reality television star, and former U.S. president Donald Trump. Unlike the rest of her family, she is not focused on a career in business. She released her first single, “Like a Bird,” in 2011, and later attended law school. In 2016, Tiffany was a central figure in her father’s successful presidential campaign. She spoke at the Republican National Convention and was a frequent guest at debates and media interviews.

Early Life: Tiffany Trump was born Tiffany Ariana Trump on October 13, 1993, in West Palm Beach, Florida. Tiffany’s parents, Marla Maples and Donald Trump, married two months after her birth. She was named after Tiffany & Company; her father built Trump Tower next to the jeweler’s flagship store on Fifth Avenue in the early 1980s. After Trump’s parents divorced in 1999, she moved to California with her mother. Tiffany has a half-sister, Ivanka, and three half-brothers, Donald Jr., Eric, and Barron. She graduated from Viewpoint School in Calabasas, California, in 2012, then enrolled at her father’s alma mater, the University of Pennsylvania. Tiffany joined the Kappa Alpha Theta sorority and earned a Bachelor of Arts degree in sociology in 2016. Trump then attended Georgetown University Law Center, graduating in 2020.

Career: When Tiffany was 17 years old, she released the electronic pop song “Like a Bird.” Later that year, she spoke about it on “The Oprah Winfrey Show,” saying “I love music. It’s always been very dear to me. It’s a big passion. It’s more of a hobby right now, but we’ll see in a couple of years if I want to take it to the next level as a professional.” In 2015, Trump scored an internship at “Vogue” magazine, and the following year, she walked the runway during New York Fashion Week in a fashion show for her friend, clothing designer Andrew Warren. 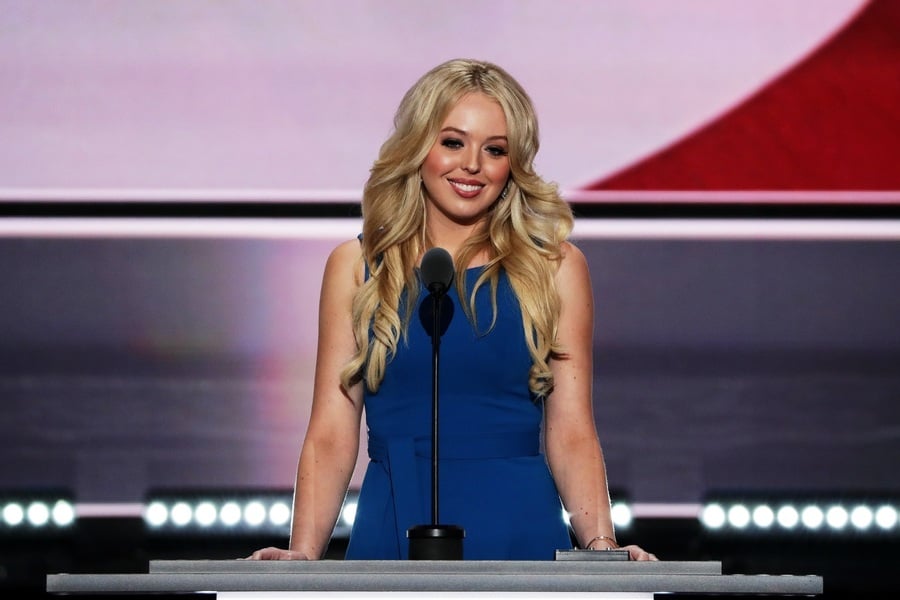 Tiffany spoke during the second night of the 2016 Republican National Convention, stating “In person, my father is so friendly, so considerate, so funny, and so real. I have admired my father all of my life, and I love him with all my heart.” She also campaigned for her father during his unsuccessful run for re-election and spoke at the 2020 Republican National Convention and numerous campaign events. In 2018, Tiffany took a job as a research assistant for Georgetown Law professor Shon Hopwood, who served 11 years in prison for bank robbery before becoming a lawyer.

Personal Life: Tiffany dated fellow University of Pennsylvania student Ross Mechanic from the fall of 2015 to the spring of 2018. A few months after their split, Trump met billionaire heir/business executive Michael Boulos while vacationing in Greece with actress Lindsay Lohan, and they became engaged in January 2021. Michael proposed to Tiffany at the White House on the last day of the Trump presidency. Tiffany enjoys posting photos on Instagram, and she has 1.4 million followers as of this writing. She often poses with the children of celebrity parents or grandparents, such as Gaïa Jacquet-Matisse (great-great-granddaughter of Henri Matisse), Kyra Kennedy (granddaughter of Robert F. Kennedy), and EJ Johnson (son of Magic Johnson), and the group has been dubbed the “rich kids of Instagram.”